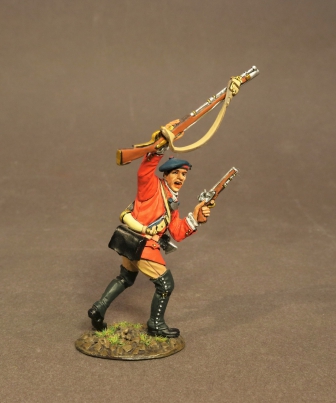 
The Battle of Bushy RunÂ was fought on August 5-6, 1763, in western Pennsylvania,
between a British column under the command of Colonel Henry Bouquet and a combined force of Delaware,
Shawnee, Mingo, and Huron warriors.
This action occurred during Pontiac's Rebellion.
Though the British suffered serious losses,
they routed the Native American Tribesmen and successfully relieved the garrison of Fort Pitt.

The mighty forks of the Ohio River,
so critical to control of the western Pennsylvania frontier,
were in the hands of the French & their Native allies no more.
Fort Duquesne had fallen ... Fort Pitt stood in its stead.

Still, it was a hotbed of contention.
For the British garrison, under siege by an Indian alliance,
it could soon be a tomb.
Canada may have surrendered in 1760,
but that succeeded only in cooling the conflict
between two great European powers, England & France.
Within the wilderness, the war was far from over.
It merely changed names.
It now was Pontiac's Rebellion,
named after the Ottawa chief who forged an alliance in the Old Northwest.
With France waiting for an opportunity to present itself,
the war in the wilderness waged on.

Earlier, in 1755, it had been General Braddock
plodding along in the forest, expecting ambush.
It came, all too soon, and resulted in theÂ Battle On The Monongahela,
and the Braddock's Defeat debacle.
Now, it seemed it was Bouquet's turn.
Though his force was comprised of grizzled veterans,
many were wounded or sick.
He traded in the invalids for the gruff frontiersmen.
The ambush could come at any turn.
The addition of the frontiersmen
was the only insurance against the inevitable.

It was to become a situation that closely resembled
the predicament of Braddock years earlier ...
an advance guard ran into hostiles,
support was sent forward, and after some stiff firing,
a bayonet charge sent the Indians from whence they had come.
The apparent successful repulse was a ruse,
for almost immediately renewed fire broke out,
from the woods on both flanks and the rear of the main British force.
It was Braddock's Defeat all over again ...
or was it? It certainly could have been,
but the difference here was the maintenance of order.
And that occurrence rests squarely on the shoulders of the troops' confidence in their commander.
Bouquet formed up in a near-hollow square on a hillside.
Indians dashed forward. Fire was exchanged.
Often a bayonet charge put an end to things for a time.
The scenario repeated ... all day.

It was an almost even match,
as it was a force of some 400 Indians opposing an equal number of His Majesty's troops.
Bouquet decided upon trickery for day two.
He feigned a retreat, lured the Indians in,
then hit them on the flan
ks with his light infantry companies. The maneuver carried the day.
Though Indian casualties were lighter than that of the British,
the Battle of Bushy Run, August 5 & 6, 1763, was over,
and broke the back of Indian resistance in these parts.
Fort Pitt was relieved. The settlements came.
A great city would one day stand at this fork in a wilderness river.