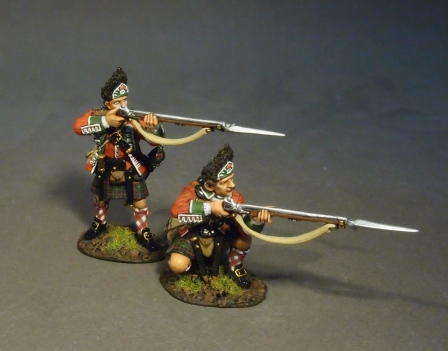 
The 77th Regiment of Foot (Montgomerie's Highlanders)
was a Highland Regiment raised in 1757.

The regiment was raised at Stirling by Major Archibald Montgomerie
as the 1st Highland Battalion and ranked as the 62nd Regiment of Foot in 1757.

It was renamed the 77th Regiment of Foot (Montgomery's Highlanders) in June 1758.

The regiment participated in the capture of Fort Duquesne in November 1758.

It sailed for the West Indies in June 1761 and took part in
the Invasion of Martinique in January 1762 and the Battle of Havana in June 1762.
It went on to New York City in October 1762
and saw action at the Battle of Bushy Run
in August 1763 after which it was disbanded later in the year.

We now accept PAYPAL,
to purchase your figures please send your order by e-mail to
inquiry@johnjenkinsdesigns.com
after checking that everything is available,
you will be billed via PAYPAL.
your order will be shipped on confirmation of payment.
worldwide airmail 12%
(minimum postage us$10)
JOHN JENKINS DESIGNS
UNIT 6H, TOWER 1,
KING LEY IND. BUILDING,
33-35 YIP KAN STREET,
WONG CHUCK HANG,
HONG KONG,
tel/fax; 852 2553 9313