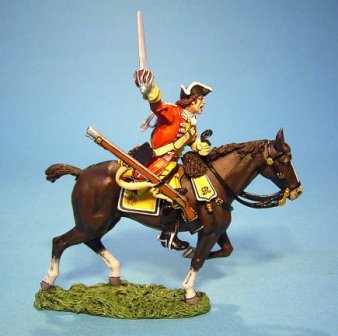 Brigadier Humphrey Gore raised the 10th Dragoons in 1715
as part of the response to the Jacobite rising of 1715,
although they did not see any action.
In 1723 command of the regiment passed to Colonel Charles Churchill
who was in turn succeeded by Field Marshall Viscount Cobham in 1745.

At the outbreak of the Jacobite Rebellion Cobham's
were serving on the Continent in the War of the Austrian Succession
as part of a British army under the command of George II's son,
the Duke of Cumberland.
When early attempts to stamp out the rebellion failed Cobham's was part of
the large force shipped back to Britain under Cumberland to deal with the threat.

Cumberland had only three regiments of horse,
Cobham's Dragoons, Kerr's Dragoons and Kingston's Horse.
At the battle of Culloden Cobham's found itself in the unusual situation
of being split between the two flanks of the army.
Both parts were engaged with the rebel army and in particular the rebel horse
and the small units of French troops sent to aid the rebels.
With victory assured it took part in the pursuit of the broken rebel army,
its troopers being the first Government troops to reach Inverness,
the Jacobite headquarters before the battle.

After the battle the regiment played an active role
in policing the highlands and the hunt for the fugitive Prince Charles Stuart,
particularly along the Aberdeenshire shore around Stonehaven.