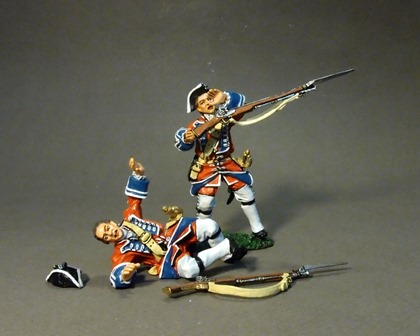 Barrell's was on the left of the front line.
The fighting opened with an exchange of artillery fire
which prompted the highlanders to start running towards the British lines
so that they were not standing targets.
They fell upon the British left so that Barrell's (and Munro's 37th)
took the brunt of the charge.
The Scots ranks were severely thinned out as they ran forward,
by grapeshot and at least two volleys from Barrell's and Munro's.
The Scots had discarded their muskets and were now armed with pistols, swords and shields.

There is no doubt that Barrell's regiment did most of the fighting that day.
The men fixed bayonets and were ordered to lunge at the Highlander
on their right rather than the man approaching their front.
In this way they were able to strike a blow
behind their shields rather than having a bayonet stuck in the shield.
The casualty figures show how bravely they fought before being forced back.
17 killed and 108 wounded, by far the greatest number out of all the regiments.