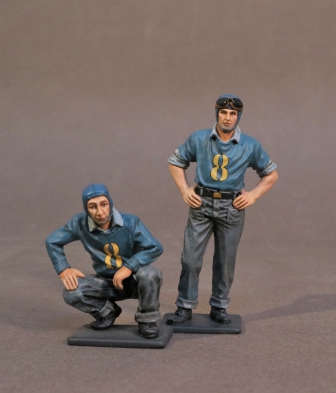 
Air operations aboard carriers included a wide variety of jobs.
In addition to the plane crews,
a large number of support personnel
were required to keep the planes flying.

Men whose duties required them to work on the carrier's flight deck
wore brightly coloured shirts for two reasons.

The flight deck was a potentially dangerous place,
especially when planes were being launched or recovered.
Anyone not wearing a colour coded shirt
didn't belong on the flight deck during operations.

A U.S. Navy Aircraftcarrier's deck crew exists to do one thing:
to consistently put aircraft into the air
and safely recover them after they launch.
In order to make this happen,
there exists a small army of flight deck facilitators,
and each individual has their own role primarily
designated by the color of the shirt they wear.

Life on the flight deck is dangerous and taxing. Spinning propellers,
grease everywhere, and a stiff sea wind
that never stops are just a few of the things
that must be endured for many hours at a time.
The night and bad weather throw a whole other set of problems into the mix.

Yellow shirts are worn by aircraft handlers
and aircraft directors that shuttle aircraft
around the carrier's tight and chaotic deck.

Plane Handlers, who work under the direction of the yellow shirt
wearing aircraft handlers, assist in moving aircraft around the deck,
they were also responsible for placing and removing wheel chocks,
and lashing and securing parked planes.
They also can operate the carrier's massive aircraft elevators,
drive tractors and work as messengers and verbal liaisons.