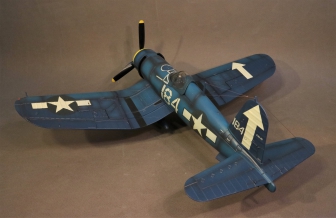 The Vought F4U Corsair is an American fighter aircraft that saw service primarily in World War 2 and the Korean War.
The Corsair was designed as a carrier based aircraft.
Initially its difficulty in landing on carriers,
rendered it unsuitable for Navy use until the Royal Navy overcame the landing issues.
After the carrier landing issues had been tackled,
it quickly became the most capable carrier based fighter bomber of the Second World War.

USS Bunker Hill (CV/CVA/CVS-17, AVT-9)
was one of 24 Essex-class aircraft carriers built during World War II for the United States Navy.
The ship was named for the Battle of Bunker Hill in the American Revolutionary War.
Commissioned in May 1943 and sent to the Pacific Theater of Operations,
the ship participated in battles in the Southwest Pacific,
Central Pacific and the drive toward Japan through Iwo Jima, Okinawa,
and air raids on the Japanese homeland.

While covering the invasion of Okinawa,
Bunker Hill was struck by two kamikazes in quick succession, setting the vessel on fire.
Casualties exceeded 600, including 346 confirmed dead and an additional 43 missing,
the second heaviest personnel losses suffered by any carrier to survive the war after Franklin.
After the attack, Bunker Hill returned to the U.S. mainland and was still under repair when hostilities ended.
After the war,
Bunker Hill was employed as a troop transport bringing American service members back from the Pacific,
and decommissioned in 1947.
While in reserve the vessel was reclassified as an attack carrier (CVA),
then an antisubmarine carrier (CVS) and finally an Auxiliary Aircraft Landing Training Ship (AVT) but was never modernized and never saw active service again.
Â Bunker Hill andÂ Franklin were the only Essex-class ships never recommissioned after World War II
Fighter Squadron 84 or VF-84 was an aviation unit of the United States Navy.
Originally established on 1 May 1944,
it was disestablished on 8 October 1945.
It was the first US Navy squadron to be designated as VF-84.

VF-84 flew F4U Corsairs and was formed around a nucleus of veterans of VF-17,
theÂ Jolly Rogers. The new squadron's commanding officer was Lt. Cdr. Roger R.Hedrick,
former executive officer of VF-17.
VF-84 was assigned to the USS Bunker Hill.
As part of Task Force 58,
the carrier and Carrier Air Group 84 (CVG-84) participated in the final drive across the central Pacific.
Roger Hedrick was promoted to head CVG-84 on the combat loss of the air group's commanding officer,
and Lt. Cdr. Raymond "Ted" Hill took over the fighter squadron.
VF-84 took part in the invasion of Iwo Jima;
raids on Tokyo and other targets in Japan;
the discovery and sinking of the Japanese battleship Yamato and support of theÂ invasion of Okinawa,
including combat air patrol over the invasion fleet to defend against Kamikaze attack,
ground support, and combat air patrol over targets on Okinawa.

On 11 May 1945, while off Okinawa,
two Japanese kamikazes struck the Bunker Hill in quick succession,
with a bomb penetrating to the pilots' ready room,
killing 22 members of VF-84.
Both theÂ Bunker Hill (then the TF-58 flagship) and CAG-84 were knocked out of the war.
Although VF-84 was reformed in July 1945 as an F6F Hellcat squadron,
the war ended while it was still in training.
While in the Pacific, VF-84 was credited with 92 kills for a loss of 4 aircraft and nine of the squadron's pilots became aces.