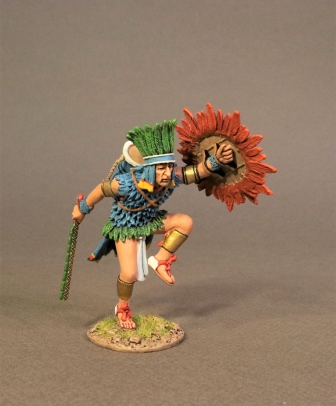 This figure does not carry a standard on the back, instead has a "skin drum".
These drums were used to transmit certain orders on the battlefield.


The Aztec Empire flourished between c. 1345 and 1521 and, at its greatest extent,
covered most of northern Mesoamerica.
Aztec warriors were able to dominate their neighbouring states
permit rulers such as Motecuhzoma II to impose Aztec ideals and religion across Mexico.
Highly accomplished in agriculture and trade, the last of the great Mesoamerican civilizations was
also noted for its art and architecture which ranks amongst the finest ever produced on the continent.

This Aztec chieftain wears a sleeveless corselet called an "ehuatl",
which was a garment of feather-covered cloth worn over cotton armour.
Senior chieftains are described as wearing a "ehuatl"of blue feathers.
Junior chieftains are described as wearing a "ehuatl" of red feathers.
Additional armour was provided by greaves,
armbands and wristlets, and a helmet made from wood,
and bone which was ornately decorated with feathers.
The greaves and armbands were generally made of gilded leather, bark or thin gold.