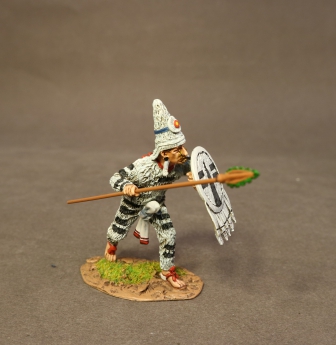 Soldiers who succeeded in capturing two enemies were awarded a uniform
consisting of a body suit called a "tlahuiztli",
a tall conical cap called a "copilli"and a shield marked with black designs described as "hawk scratches".

The Tlahuiztli was made of sewn cotton.
Red, yellow, blue or green feathers
were meticulously stitched to the cloth in the workshops of conquered city-states
and sent to Tenochtitlan each year as tribute.

The Huaxtec area held a particular fascination for the Aztecs because it was rich in cotton.
The goddess of spinners and weavers was called Tlazolteotl.

For this reason the soldiers thought it appropriate to wear
hanks of un-spun cotton through their ear spools,
as well as the "Yacameztli" or"nose moon"in gold
in honour of her role as a patron of the moon.