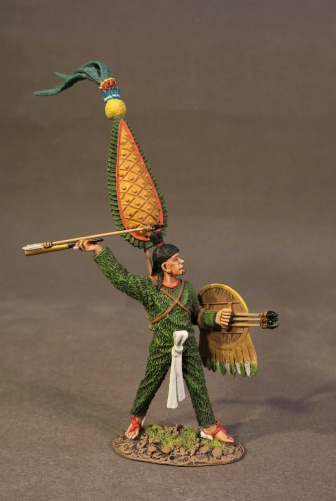 The Aztec Empire flourished between c. 1345 and 1521 and,
at its greatest extent,
covered most of northern Mesoamerica.
Aztec warriors were able to dominate their neighbouring states
and permit rulers such asā Motecuhzoma II
to impose Aztec ideals and religionā across Mexico.
Highly accomplished in agriculture and trade,
the last of the great Mesoamerican civilizations
was also noted for its art
and architecture which ranks amongst the finest ever produced on the continent.

The ATLATL, or spear thrower was about two foot long and was often ornately carved and decorated.
It had a hooked end and a groove in which to rest the butt end of the dart or javelin.
There was also a pair of holes or finger loops
about two thirds of the way along for the index and second fingers.
It enabled javelins to be thrown further
and with a force many times greater than was otherwise possible.
Modern tests indicate that it had a probable maximum range of about 150ft.
Considerable accuracy was possible at 120ft,
and modern tests show that a a four inch target
could consistently be hit at this distance.
The penetrative power of darts or javelins using the Atlatl
was greater than that of an arrow.
Bernal Diaz del Castillo commented
that ‚Äúthey could pass through any sort of armour,
and against them there was no means of protection‚ÄĚ.

The darts or javelins which were called TLACOCHTLI,
were of oak. They averaged between 3-4 feet in length,
and had either a fire hardened tip,
or a blade of obsidian.
They were often barbed so that ‚Äúit cannot be removed
without making a large wound unless it can be pulled out at the other side‚ÄĚ.