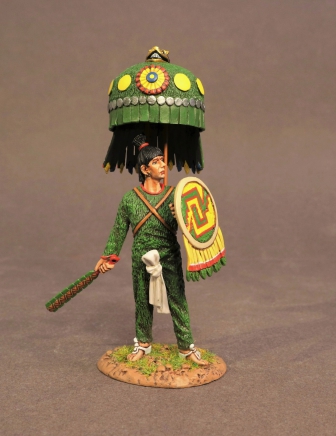 The Aztec Empire flourished between c. 1345 and 1521 and,
at its greatest extent,
covered most of northern Mesoamerica.
Aztec warriors were able to dominate their neighbouring states
and permit rulers such asÂ Motecuhzoma II
to impose Aztec ideals and religionÂ across Mexico.
Highly accomplished in agriculture and trade,
the last of the great Mesoamerican civilizations
was also noted for its art
and architecture which ranks amongst the finest ever produced on the continent.

The "tlahuiztli"was a tight fitting body suit constructed of woven cotton
and then decorated with a variety of patterns and designs in feathers.
It had an open back that could be tied up with ribbons.
Captains and high ranking units wore various back ornaments,
constructed of bark paper, cloth and feathers.
They were secured to a cane back rack which in turn was ties across the chest with leather straps.