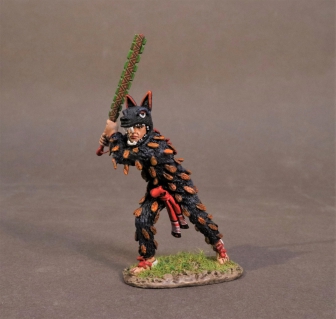 The mighty Aztec warrior priests were not only important figures in society
but also fearsome warriors
who were more than capable of wielding a macuahuitl
with deadly intent on the battlefield.

In normal life Aztec priests would be responsible for many tasks,
and often occupied high positions in society.
They would be the life and blood of the Aztec religion,
but also worked in government, created calenders,
and were the primary record keepers.
In addition they would teach in the schools
and warrior training structures like the Calmecac and the Telpochocalli.

As a warrior priest however their role was different,
they would fight alongside the Aztec warriors blow for blow.
The warrior priests were armed with weaponry capable of inflicting severe injury,
and they were protected with armour and shields
and were more than capable or holding their ground.

Among the Aztecs a priest who had captured six of the enemy wore a Cayote suit.
The TLECOYOTL or “fire cayote”
had prominent red/orange macaw feather “flames” over the whole suit.