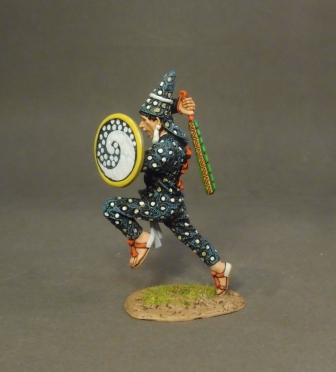 The Aztec Empire flourished between c.
1345 and 1521 and, at its greatest extent,
covered most of northern Mesoamerica.
Aztec warriors were able to dominate their neighbouring states
and permit rulers such as Motecuhzoma II to impose Aztec ideals
and religion across Mexico.
Highly accomplished in agriculture and trade,
the last of the great Mesoamerican civilizations
was also noted for its art and architecture
which ranks amongst the finest ever produced on the continent.

The empire continued to expand from 1430 and the Aztec military - bolstered
by conscription of all adult males,
men supplied from allied and conquered states,
and such elite groups as the Eagle and Jaguar warriors - swept aside their rivals.
Aztec warriors wore padded cotton armour,
carried a wooden or reed shield covered in hide,
and wielded weapons such as a super sharp obsidian sword-club (macuahuitl),
a spear or dart thrower (atlatl), and bow and arrows.
Elite warriors also wore spectacular feathered and animal skin costumes
and headdresses to signify their rank.
Battles were concentrated in or around major cities
and when these fell the victors claimed the whole surrounding territory.
Regular tributes were extracted and captives were taken back to Tenochtitlan for ritual sacrifice.
In this way the Aztec empire came to cover most of northern Mexico,
an area of some 135,000 square kilometres.

The mighty Aztec warrior priests were not only
important figures in society but also fearsome warriors
who were more than capable of wielding a macuahuitl
with deadly intent on the battlefield.

In normal life Aztec priests would be responsible for many tasks,
and often occupied high positions in society.
They would be the life and blood of the Aztec religion,
but also worked in government, created calenders,
and were the primary record keepers.
In addition they would teach in the schools
and warrior training structures like the Calmecac and the Telpochocalli.

As a warrior priest however their role was different,
they would fight alongside the Aztec warriors blow for blow.
The warrior priests were armed with weaponry capable of inflicting severe injury,
and they were protected with armour
and shields and were more than capable or holding their ground.

A Warrior Priest who had taken four captives
wore a “Tlahuiztli” known as the Cicitlallo Cuextecatl,
which roughlty translates as “Starry Night” .
This unique war suit really made the warrior priest stand out.