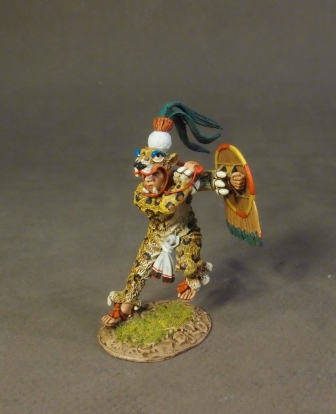 The Aztec Empire flourished between c.
1345 and 1521 and, at its greatest extent,
covered most of northern Mesoamerica.
Aztec warriors were able to dominate their neighbouring states
and permit rulers such as Motecuhzoma II to impose Aztec ideals
and religion across Mexico.
Highly accomplished in agriculture and trade,
the last of the great Mesoamerican civilizations
was also noted for its art and architecture
which ranks amongst the finest ever produced on the continent.

The empire continued to expand from 1430 and the Aztec military - bolstered
by conscription of all adult males,
men supplied from allied and conquered states,
and such elite groups as the Eagle and Jaguar warriors - swept aside their rivals.
Aztec warriors wore padded cotton armour,
carried a wooden or reed shield covered in hide,
and wielded weapons such as a super sharp obsidian sword-club (macuahuitl),
a spear or dart thrower (atlatl), and bow and arrows.
Elite warriors also wore spectacular feathered and animal skin costumes
and headdresses to signify their rank.
Battles were concentrated in or around major cities
and when these fell the victors claimed the whole surrounding territory.
Regular tributes were extracted and captives were taken back to Tenochtitlan for ritual sacrifice.
In this way the Aztec empire came to cover most of northern Mexico,
an area of some 135,000 square kilometres.

The War suit, called an OCELOTOTEC,
was woven to resemble an animal skin.

In the case of noblemen, this was made from feathers.
Men of non-noble birth attaining the rank of Jaguar warrior,
usually had to make do with suits made from actual skins.
These usually had the clawed paws around the wrists and ankles.

In most armies uniforms are used to differentiate units.
In the Aztec army uniforms served to differentiate men
with different levels of military experience within the same unit.
Rank descriptions in uniforms between warriors depended on
how many captives each individual hed taken.
A soldier who succeded in capturing four of the enemy
was awarded a Jaguar suit and helmet.
It was believed that to capture an enemy,
honored their gods in a way far greater than killing enemy soldiers in the battlefield.
For a warrior to kill an enemy was considered clumsy.
The captured prisoners were offered as a sacrifice to the Aztec gods.


The jaguar motif was used due to the belief
that the jaguar represented Tezcatlipoca, god of the night sky.
Aztecs also wore these dresses at war because they believed
the animal's strengths would be given to them during battles
Following the warrior's path was one of the few ways to
change one's social status in Aztec culture.
Eagle and Jaguar warriors were full-time warriors
who worked for the city-state to protect merchants and the city itself.
They were expected to be leaders and commanders both on and off the battlefield,
and acted as sort of a police force for the city.
Men who reached this rank were considered as nobles and elites of society,
and were granted many of the same privileges as a noble.