ARMIES AND ENEMIES OF ANCIENT ROME 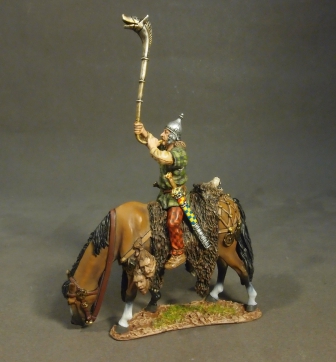 The Gauls emerged around the 5th century BC
as the bearers of the La Tène culture north of the Alps
(spread across the lands between the Seine, Middle Rhine and upper Elbe).
By the 4th century BC,
they spread over much of what is now France, Belgium,
Switzerland, Southern Germany, Austria and the Czech Republic
by virtue of controlling the trade routes along the river systems of the Rhône,
Seine, Rhine, and Danube, and they quickly expanded into Northern Italy,
the Balkans, Transylvania and Galatia.
Gaul was never united under a single ruler or government,
but the Gallic tribes were capable of uniting
their forces in large-scale military operations.
They reached the peak of their power in the early 3rd century BC.
The rising Roman Republic after the end of the First Punic War
increasingly put pressure on the Gallic sphere of influence;
the Battle of Telamon of 225 BC heralded
a gradual decline of Gallic power over the 2nd century,
until the eventual conquest of Gaul in the Gallic Wars of the 50s BC.
After this, Gaul became a province of the Roman Empire,
and the Gauls were culturally assimilated into a Gallo-Roman culture,
losing their tribal identities by the end of the 1st century AD.

The carnyx may be described as a type of war trumpet.
This instrument was a valveless horn that was made of beaten bronze,
and can be easily recognized due to its shape.
Another distinct feature of the carnyx is its bell,
which often depicts the head of some animal.
Such animals include boars, dragons, serpents, birds and wolves.
The bells of the carnyx were fashioned after these animals
so as to strike fear into enemy warriors.
Additionally, some bells were made with joints at the jaws,
which would cause the animal’s head to move when the instrument was blown,
thus adding to the psychological effect it had on the enemy.

Whilst the sight of the carnyx struck fear into the hearts of the enemy,
it was the sound of it, which has been described as lugubrious and harsh,
that probably had a greater impact on enemy morale.

The instrument's significant height also allowed it to
be heard over the heads of the participants in battles or ceremonies.